Smoking In The Boys Room 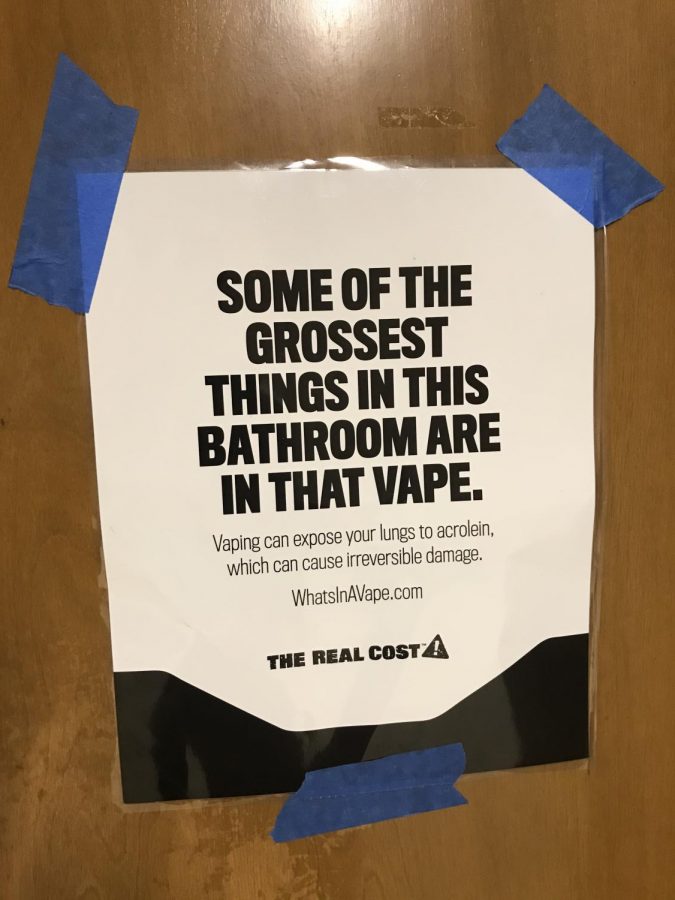 The year began with talks about companies and products like Juul and their popularity among teens. Since then, we have heard about multiple deaths and sicknesses that have evolved as a result of vaping. Still, teens are turning to Juul, Puff bars, “mods”, and other vape devices.

Many teens turn to vape and other substances, they say,  as a way to cope with emotional struggles and mental health problems. There are many health care professionals who say substance abuse causes depression or anxiety, and while in some cases this is true, more often than not, some teens believe it is the opposite. it is the other way around. Many teens get involved with addictive substances, knowing the health consequences because they need a way to escape. The chemicals in nicotine provide a short-term fix for the daily stress and emotional turmoil teens experience.

Another common reason teens turn to vape is that they are seeking a social bond with other people. Many teens find it hard to connect with others, and but people from very different social groups connect in school bathrooms sharing their vaping devices, and making conversation. Shared habits and hobbies can build bonds between people that wouldn’t normally connect. Vaping products are often marketed as a good social opportunity.

The biggest problem is that teens are thinking about the short-term a lot more than the long-term. A teen from Clackamas High School named Willie Shiozawa admitted that he has struggled with nicotine addiction in the form of vaping. He started using nicotine to help control his anxiety and alleviate some symptoms of depression. He didn’t want to begin that conversation with his parents and was willing to do whatever he needed to in order to avoid having that conversation with them. Nicotine, he says,  was a way for him to temporarily suppress his symptoms enough to get by.

There are also a few other reasons that teens are turning to vape products. Vape products are often marketed as “cool”. They are also produced in good-tasting flavors that also make the product seem less dangerous. Teens have easy access to these products through older friends or family that will supply them with vaping products they aren’t old enough to buy themselves. These people are often referred to as “plugs.” Other places teens can get access to these products are at some convenience stores or gas stations that commonly won’t ID minors even when it is obvious that they are not 21.

Even though there are many reasons teens are using these products, the reason is not the problem. The problem lies in the fact that teens are using these products even with all of the potential consequences. This year has brought vaping illness to light, as people across the nation are getting sick, and some are dying from an illness that has been linked to vaping. There are also the problems of addiction and substance abuse, as well as destroying the brains that aren’t even fully developed yet.

In an interview conducted with Jonathan Modie from Oregon Health Authority, we learned that OHA is conducting investigations into the “vaping associated lung injuries.” This is the term that the medical field has coined to refer to all of the injuries and deaths associated with vaping. You might wonder how all of these cases can all be tied together as having vaping as a cause. Modie said that in all of the cases, the person affected reported having vaped at some point in the last ninety days. Oregon is home to 23 cases of vaping associated lung injuries. Multiple of these cases involve people under the age of 17, while many of the cases involve people who fall in the age group of 18-24. Two of the twenty-three cases in Oregon involved not only injury but death.

There are many health consequences other than those that first come to mind (death, cancers, lung problems,etc…). Moodiness, difficulty concentrating, unusual behavior, tiredness, shortness of breath, headaches, nausea as well as increased anxious behavior are all side effects of vaping. In some of the cases of vaping related lung injuries that involve teens, the affected teens are said to, “have the lungs of someone who smoked well into their 70’s.”

During the interview, Mr. Modie said that there are already steps being taken to alleviate the damage being done. Governor Kate Brown created a workgroup that includes experts on tobacco and nicotine addiction, physicians and epidemiologists as well as other experts. This workgroup is dedicated to researching the vaping associated lung injuries, as well as the products involved and the effects of vaping on different parts of the body. This group is also trying to figure out whether the cause of the injuries is a product being added to the vape or something already included.

OHA is currently conducting an education campaign on the dangers of vaping. They are utilizing billboards and advertising information in search engines. Their goal is to prevent the group that is most easily addicted and attracted to vaping, from using it. Teenagers’ brains are not fully developed, and when a substance is used before full brain development, you are more likely to become addicted. As mentioned earlier, teens are also the group that is being marketed to the most. Many adults who use nicotine and tobacco didn’t begin as adults. The tobacco industry makes most of its money from long-term users who start early, and the vaping industry is no different.

CHS Junior Alex Thorpe is another teen who was interviewed is a who says he began using nicotine because it seemed fun and he wasn’t really that worried about the health consequences. He said that he began using it when he was around friends and it was just for fun. He acknowledged that it quickly got out of hand and spiraled into an addiction.

Teens need more information on what effects vaping truly has on their bodies. Learning about the health risks in-depth would likely turn away many potential users. Having mental health resources more easily available and talked about among teens would also turn away many users, and help some current users. Better promotion of resources to help end the addiction, as well as having doctors talk about vaping with their patients would help many teens that are struggling with addiction as a result of many of the potential causes. Banning harmful substances that go into vape oils, and better regulation of these, as well as devices, would help people of all ages who are suffering health consequences. Holding companies that produce these substances to a higher standard can help more people too. Meanwhile, it appears there is a lot more going on in the school bathrooms than gossip.